Rome, Italy’s capital city, is one of the oldest continuously occupied areas in Europe with over two thousand five hundred years of history. We spent an entire week in Rome and saw only a fraction of the historical sites the city has to offer.

To help us learn more about this ancient city, we teamed up with Walks of Italy and participated in their new VIP Caesar’s Palace Tour with Colosseum & Roman Forum tour. The unique feature of this tour is that it allows exclusive access to Caesar’s Palace, the home of Emperor Augustus Caesar (nephew of Julius Caesar) and his wife, Empress Livia, from the 1st century BC! Previously opened only for archaeologists and historians, special tour groups are allowed inside to view these amazing rooms.

Our tour started at the Colosseum with pre-reserved tickets getting us inside the historical structure ahead of the largest crowds. Walk through the huge archways and be transported back thousands of years to a time when gladiators fought to the death in the massive arena. Close your eyes and run your hands along the limestone pillars – you can imagine the cheers and commotion of ancient events.

We explored the first and second tiers, learning the history of the games and structure as well as the politics and social functions surrounding the Roman Empire. After our lesson, we were given ten minutes of free time to wander around to the other side of the amphitheater for more pictures. 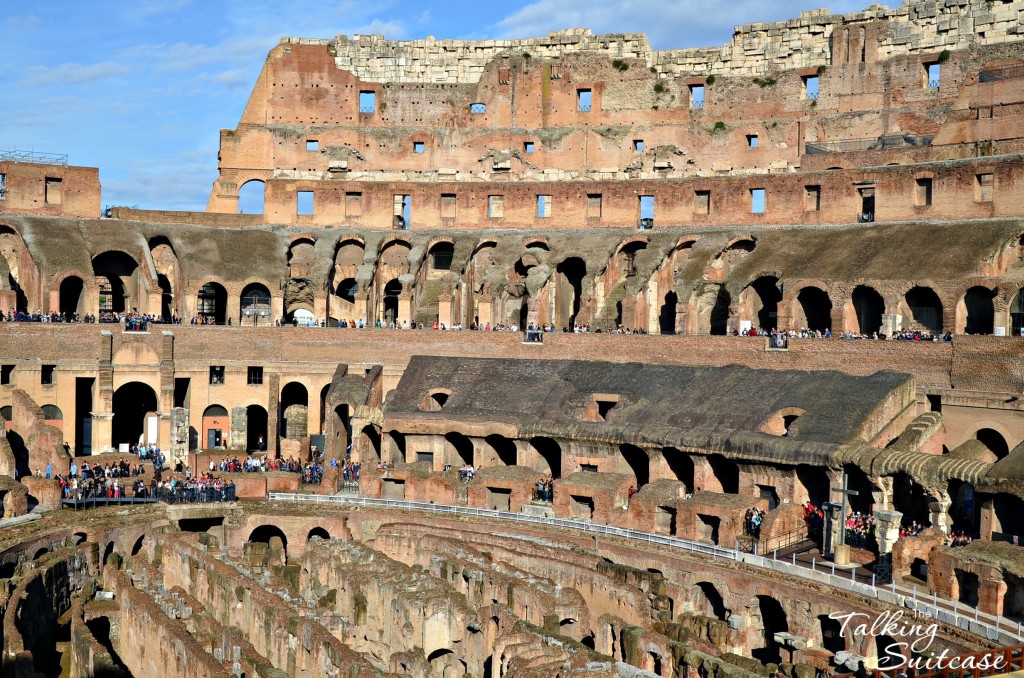 The Colosseum was commissioned by Emperor Vespasian around A.D. 70 and is now almost 2,000 years old! It took approximately 10 years for 25,000 slaves to build the Colosseum. The site was used for gladiator and wild animal games for four centuries before falling into disuse.

The gladiatorial games were more than mere games and a form of entertainment. While the games were horrific, initially there was a religious aspect to the “gore”. Human sacrifices were used to celebrate the death of a nobleman in order to appease the spirit of the dead. With time, this connection was lost and the games grew in splendor and became more frequent until they became an almost an everyday occurrence as during the time of Julius Caesar.

Gladiators were generally slaves, criminals and prisoners of war. However, a small minority of free men joined as a profession, some for a love of the danger and others to obtain the enrollment bonus.  Gladiators were sent to one of the many gladiator training schools to be trained in combat skills, different fighting styles and weapon use as well as how to die.

My kids were both fascinated and horrified with the role of animals in the games. We were told that the first round would consist of a hunt where wild animals were brought into the arena to stalk each other and humans as well! Smaller animals such as birds would start the event, moving up to larger animals such as panthers, bears and lions. One of the largest animals brought into the games was a hippopotamus. Historians suggest that thousands of animals were killed in just one day.

After leaving the Colosseum, we passed the Arch of Constantine and were given a brief history of it’s creation and the surrounding area. Upon reaching the gates of the Roman Forum, we were again provided with pre-reserved tickets to jump ahead of the line to enter the monumental area. The Roman Forum was once the center of Roman public life. It was the site of religious, commercial and political affairs. It’s located in a valley between the Capitoline and Palatine Hills, with construction beginning in the 5th century BC.

We walked around the area, listening to stories about Marc Antony, Julius Caesar and Augustus Caesar. We saw the sight of Julius Caesar’s cremation, the ruins of sacred temples and the place where the Senate met thousands of years ago. Temple of Antoninus and Faustina In preparation for our tour in their homes, we were taken on a verbal journey through the lives of Augustus Caesar and Livia Drusilla. The two met when Livia was a child and again later in life when he eventually married her. Climbing the Palatine Hill, a gate was opened just for our small group as we entered Casa di Augusto and Casa di Livia – the homes of Augustus Caesar and Livia. Archaeologists and preservationists have been working hard for many years restoring the ancient treasures of Caesar’s Palace. With our VIP experience, we were able to explore the rooms without the crowds, get up close insight into  the lives of Emperor Caesar and his family and take our time wandering around and examining the palace.

At the imperial houses, we walked along new pathways leading through various rooms once occupied by the Emperor and his family. It’s amazing to be one of the few people to have actually seen the incredible floor tiles, vibrant fresco paintings, and lovely ceiling moldings. We browsed many rooms in each home including the study of Augustus. Walking into into Livia’s apartment was a breathtaking experience.  After descending through a narrow stairwell, the room opens into a large rectangular atrium with four rooms.  Your eyes are drawn skyward to the huge domed ceiling and massive arches. Just be careful so you don’t accidentally get too close to one of the fresco’s!  A loud announcement will sounds in Italian and English warning you to move away from the paintings 🙂

Can you believe the beauty of the frescos from Augustus Caesar’s Palace in Rome? You can see the original colors still intact 2,000 years after their creation.

There are numerous benefits of taking a tour in Rome.  First, you have a knowledgable guide recounting history and stories – way more information than you would learn from a guide book alone. Second, Rome is a busy city!  Booking with a tour company means you have less wait time getting into attractions. Who wants to spend their entire vacation waiting in line?  You can also sign up for special access or “backstage” tours that allow you to see things that most tourist miss.   We would have never seen the homes of Augustus Caesar and Livia without the tour.  Yes, you will spend a little more money.  But the experiences are well worth the additional cost.

Overall, we were highly impressed with Walks of Italy. Our guide, Lucilla, was extremely knowledgeable and friendly. She was able to answer every question thrown her way and took the time to tell stories she thought my kids would particularly enjoy. She even stayed after the tour ended to answer a few more of the kids questions.

What is your favorite experience in Rome?

Activity Level:
Moderate – Walking over uneven terrain and climbing of stairs is required.

Tips:
Large bags are not allowed. If traveling with young children, skip the stroller and use a carrier. Disclosure: We received a complementary tour from Walks of Italy to help facilitate our review of the exclusive tour of Caesar’s Palace.  As always, opinions are 100% my own and may differ from others.