We planned our first visit to Slovakia for December, just so we could experience the Bratislava Christmas Market.   Approximately 100 red & white stalls teem with traditional Slovakian cuisine and handcrafted goods. Live music played nightly with locals and tourist milling about, shopping, eating, drinking, laughing and dancing.  It was fun for our entire family to be part of the lively Christmas atmosphere.

The kids favorite part of our visit was eating their way through the Christmas Market. This is becoming a theme with them. It’s a great motivational tool to get them out the door!  Tantalizing aromas tickle your senses as you make your way through the market. The sweet smell of cinnamon, the sizzling of frying sausage and the roasting of chestnuts all blend together to leave your stomach grumbling. 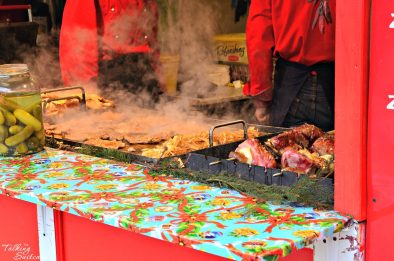 Meat barbecuing and ready to eat 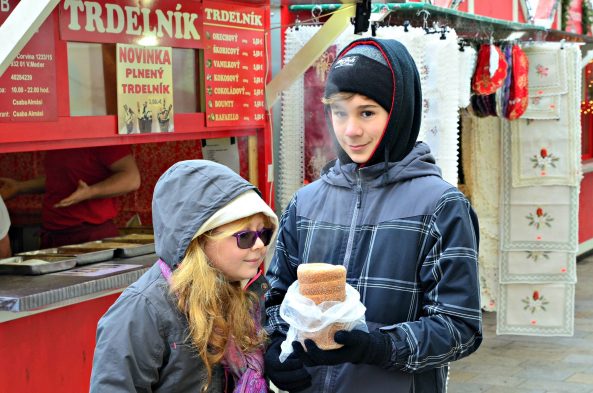 Visitors will find traditional dishes such as cabbage soup in a bowl and barbecued meat turning slowing on a stick. Plenty of high tables are set up around the market, so you can enjoy your meal while taking in the festive market atmosphere.

END_OF_DOCUMENT_TOKEN_TO_BE_REPLACED We had two busy days exploring Bratislava, the Slovak capital.  It was an easy task to find tourist attractions in Bratislava the kids enjoyed.  A city rich with history, food and a castle is always a favorite with my children.

Following the maze of cobblestone streets, we were at once smitten with the old world charm of this city situated along a bank of the Danube River. Impressive pastel buildings line the streets, showcasing the historical grandeur of Bratislava during the Hungarian Empire. The city was of such importance that Queen Maria Theresa of Austria ordered the city walls torn down in order to expand the capital.  They couldn’t have nobility residing outside the city walls!

Our first chore on day #1 was to schedule our FREE guided walking tour as part of the Bratislava City Card with the Bratislava Tourist Board. Our enthusiastic guide discussed the long history of Bratislava and took us to visit some of the most famous spots around Old Town.

We learned that Bratislava has been in 12 different countries over the past 100 years. At one time it was part of the Hungarian Empire, became part of Czechoslovakia after World War I, later came under Nazi control, then communist control before finally becoming the capital of the Slovak Republic in 1993.