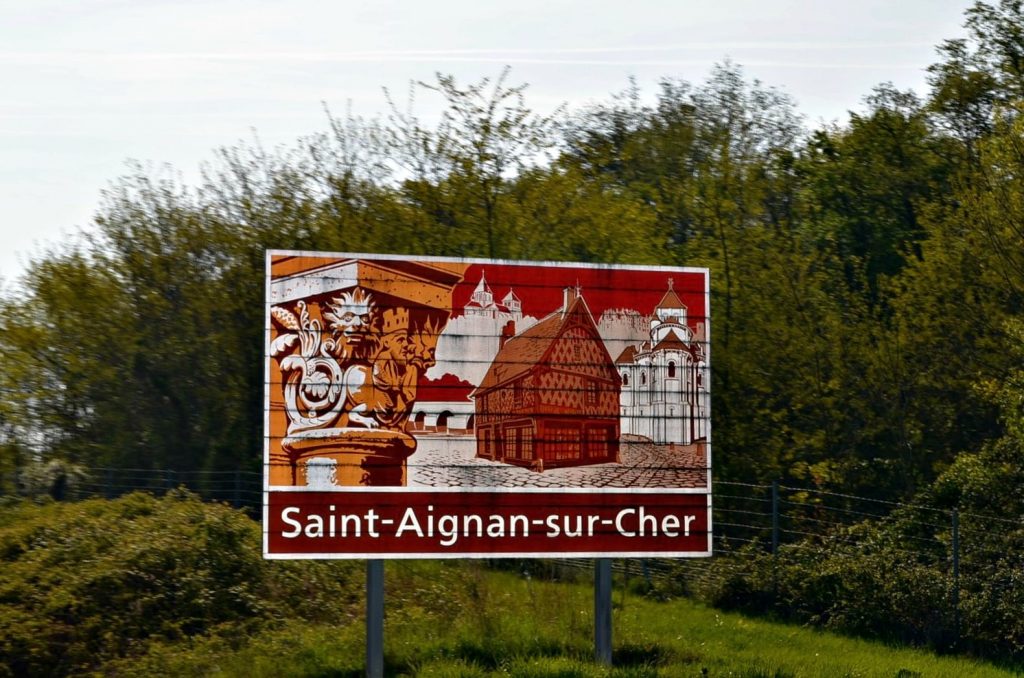 Driving in France can be challenging, especially if you can’t read French.  The thought of getting in the car and navigating roads at 60+ mph in a foreign country can be scary.  But really, it’s pretty much the same as driving in the U.S.A. and most other countries.  The exception being the UK, as they drive on the wrong side of the road 😉  French road signs are pretty straightforward and use a lot of universal symbols.   However, it is important to know what those signs mean and how you should interpret them.  This guide can help you travel safely and successfully in France.

On our recent road trip, I took pictures of signs we passed on both the interstate and local roads.  A few times I had to have the kids translate a word or two for me.  It’s so nice to travel with kids that are pretty much fluent in the language!  But first, lets look at some key vocabulary.

It is also important to note that in France there is priorité à droite or the right-of-way is to cars entering from the right. This is always the case unless you have a sign with a yellow triangle giving you priority. While you won’t really find people merging into your lane as if you weren’t there as they enter the highway, they do have the right of way.   If there is an accident, you are at fault.  This is opposite of in the U.S., where priority is given to those already on the highway. 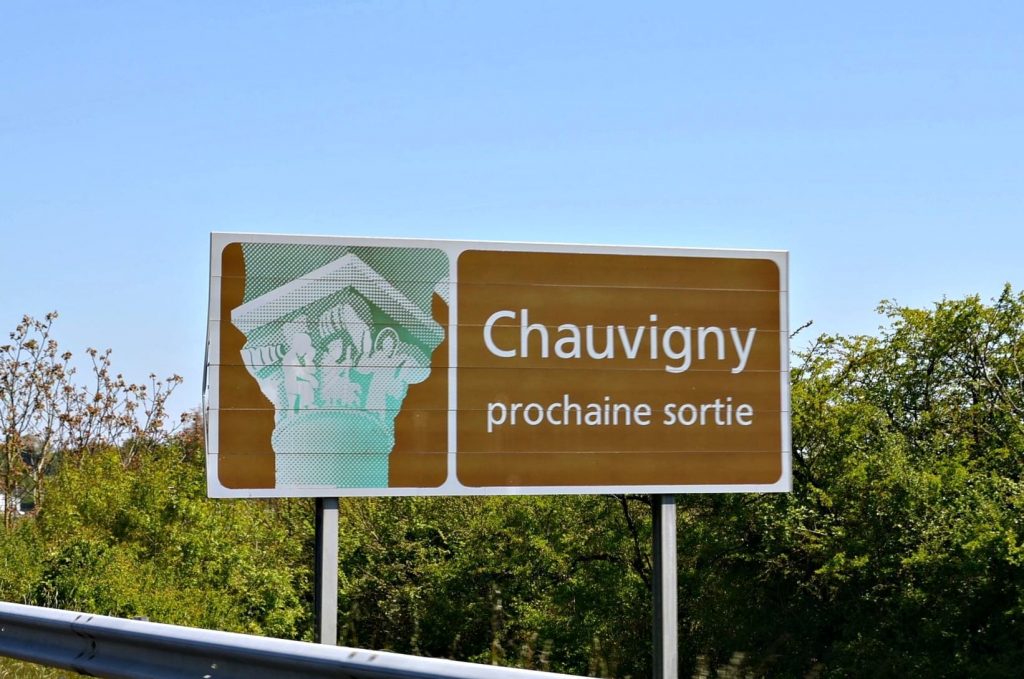 No Driving in the Left Lane

Also, when driving on French highways (autoroute), drive on the right and pass on the left. DON’T drive on the left. Of course, in congested areas there will be cars in all lanes, but slower traffic always keeps right. We’re always amazed how pretty much everyone follows this rule. The left lane is only for passing. Once past a vehicle, people move to the right lane. If there are three lanes, people will stay to the far right lane and use the middle lane for passing also.  We’ve never seen anyone pass in the right lane. People tend to wait (very impatiently with flashing headlights) for the person in the left to move over. No zig-zagging here!

As in other countries,  you don’t cross solid white lines.  This is particularly important to follow in France.  Cross lanes only at dashed white lines.  You might also see longer lines with dashes on the side of the road.  These are to help show distance and serve as a reminder to how close you are following the vehicle ahead.  Two cars shouldn’t be in the same line at the same time. 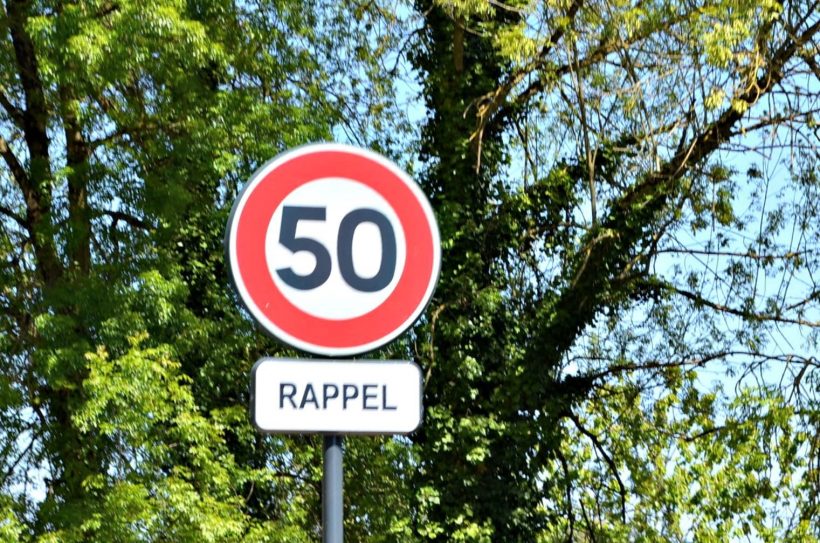 Reminder your speed is 50 km/h Speed is 90 km/h with a lane merge Please note – Speed is in km/h and distance in kilometers (km) or meters (m).

Depending on the area, you might also see speed limit signs with a car under it and another with a weight such as 3.5t. The cars may be able to go 110 km/h but the 3.5+ ton trucks can only do 90 km/h. 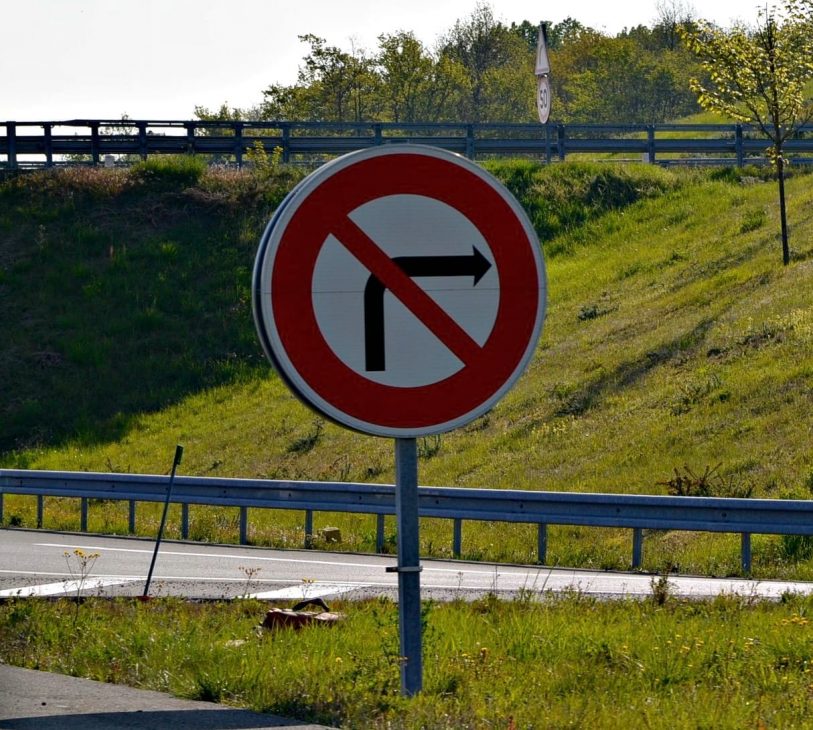 Watch for deer the next 5km Translates to “Attention to Slow Vehicles” Closed to Vehicles “Prohibited Except Deliveries” Red on signs means danger!!    You are being warned about something.  It maybe a curve in the road, narrowing road, animals, no passing, pedestrians, etc.  The signs are mostly self-explanatory, but you should pay close attention when seeing red signs.

The traditional yield sign above is common when entering roundabouts showing who yields. Yield to traffic already in the roundabout, but don’t stop if there is no one coming.

Pay special attention to the red sign with the white horizontal line.  It means NO entry.  This one is super important especially since France has a ton of one-lane roads.  Additionally, the blue sign with a red “x” means that vehicles are prohibited. How many meters are left to the destination This symbol on the sign shows you’re on or entering the tollroad.

You’ll notice that the directional road signs are color coded in France.  The signs are pretty standard but it’s important to know the exit number of the local road.  In the image to the left, exit #30 is to the right in 200m.  Typically you won’t see a sign below it indicating the area unless it’s a major city. Merging to one lane Pedestrian crossing and a speed bump

Signs with a white edge and a blue background tell you what you have to do.  Above is a sign for merging traffic and a double sign with pedestrian crossing and speed bump. 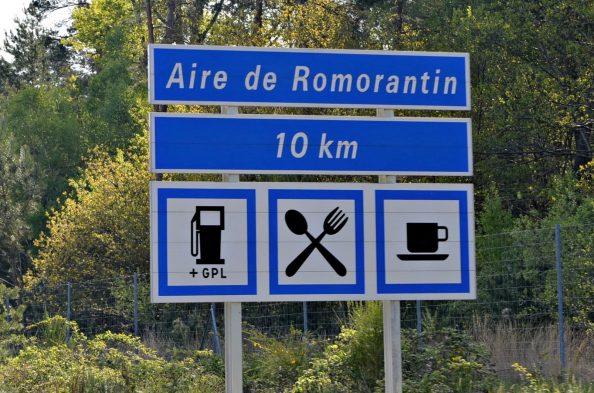 Autoroutes have a ton of rest stops, but they are not all created equal.  If you need to stop and stretch your legs and use the restroom, you can pull into pretty much any area.  I prefer to stop at the rest areas that also include a gas station and food, as the bathrooms are usually cleaner.  The handy images will tell you exactly what can be found at each rest area and how far away it is.  These rest areas are literally just off the autoroute, so pull in and get back on with ease.

By taking a few minutes to review the important vocabulary and French road signs, you should have no problem navigating the roads in France.  Be vigilant when seeing a sign in red and always remember to drive in the right line.