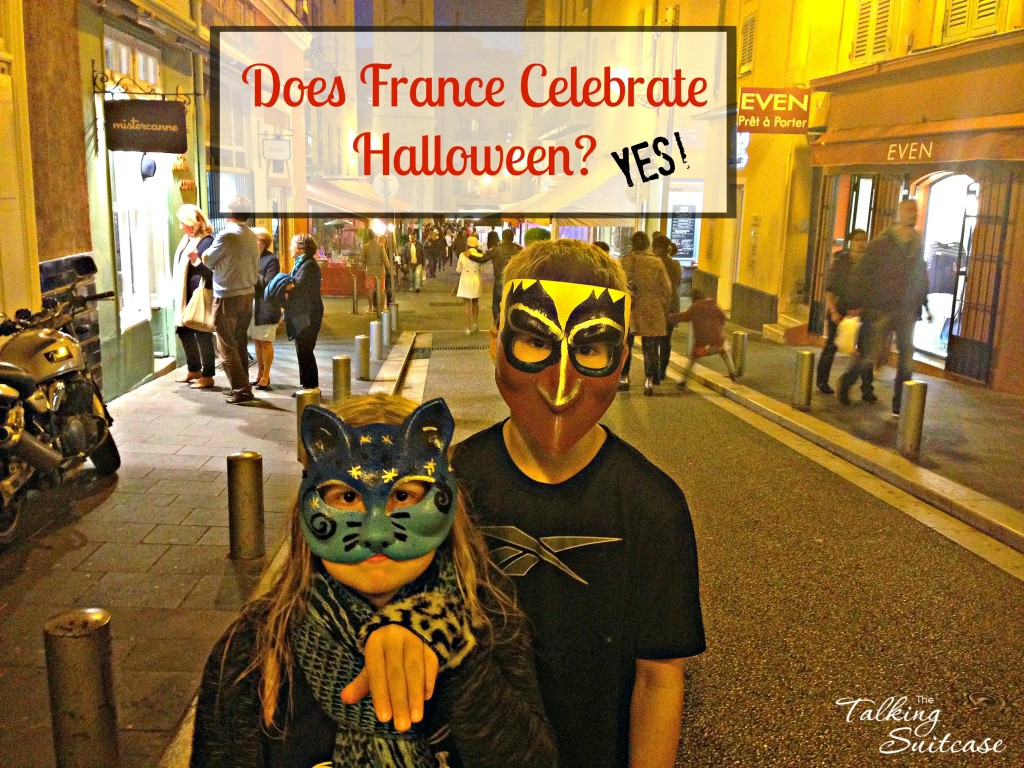 Does France Celebrate Halloween? The answer is YES!  It’s just different from celebrating in the U.S.

Halloween was first introduced in France in the 1990’s, when American’s brought their tradition with them  and celebrated on October 31st.  I’m told the French are always looking for an excuse to dress-up, so it’s no wonder the holiday became somewhat popular.  From my understanding, the interest level in Halloween dropped for awhile, but has picked back up in recent years.

We celebrated Halloween in Nice, so I can’t speak for the entire country.  I can only assume there would be similarities throughout the regions of France.  If  you’re in France on October 31st, ask the locals how they celebrate.  If you want to pronounce the word like the French, don’t say the “h” in “halloween.” It’s pronounced like /ah-lo-ween/. Who’s to say who’s right?

Unlike in the U.S., France does not acknowledge Halloween as a holiday.  You won’t find the date marked on the calendar and my kids  didn’t do any type of Halloween activities in school.

The official holiday is the Catholic holiday, La Toussaint, on November 1st. This is a day of mourning the dead, bringing flowers to the grave and praying.  It’s a solemn holiday.  A stark contrast to the whimsial  festivities the day prior.

There was one small display set up in Carrefour dedicated to Halloween costumes and decorations. Interestingly, there were so many people around the display that I couldn’t even get a picture!  Unlike the U.S.,  you won’t find rows upon rows of candy bags, decorations and costumes for women, women, children and pets.

Decorating didn’t begin until the day of Halloween, and most places didn’t even bother.  We saw some balloons and a few spider webs.   There were no carved pumpkins or witches cackling.  Most of the decorations were at bars instead  of stores.  It’s a great marketing trick to get tourists inside to drink!

Trick or Treating often takes place in apartment buildings in Nice, provided you live in a building with a lot of children.  Our French teacher’s daughter goes to her aunt’s house since she lives in a large complex just outside of the city.

Our apartment building doesn’t have any kids, so we ventured out and let the kids trick or treat at the shops in Old Town.  How to you know if they have candy? You just ask.

There are no porch lights on to tell you which houses to visit.  The kids could say “Des bonbons ou un sort” for trick or treat, but the (French) kids just say “avez-vous des bonbons?” which is simply “Do you have candy?”   I thought that was quite funny.  The proprietor would either say oui and drop some candy in the kids bags or non and the kids left empty handed. 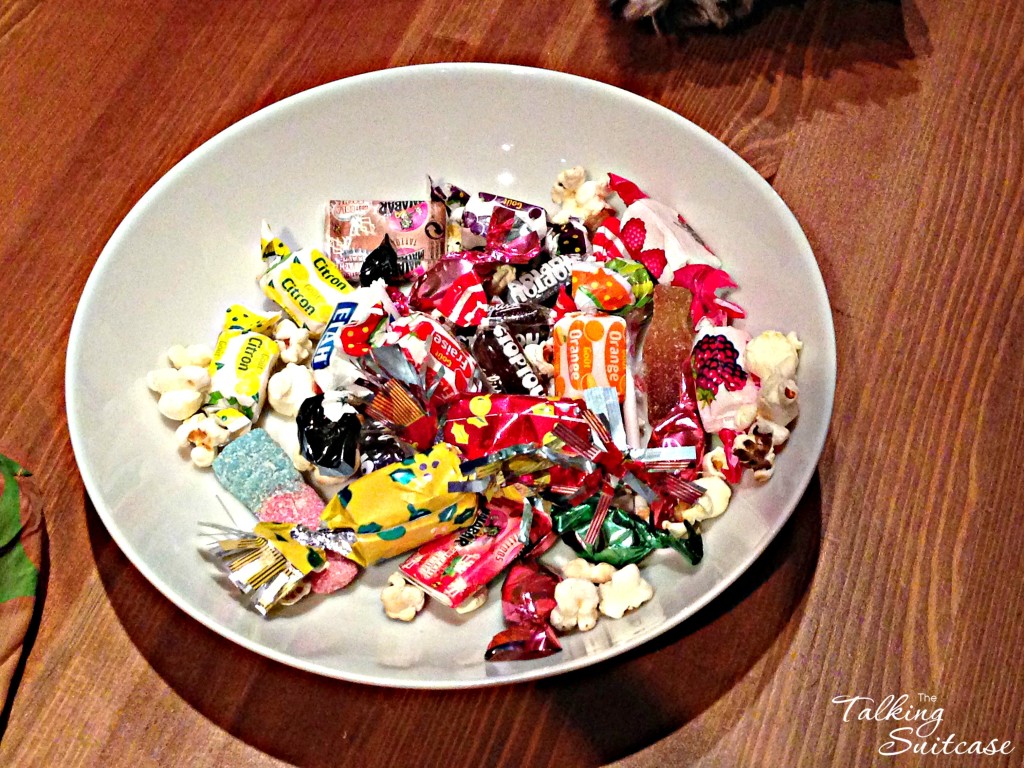 A look at the Halloween candy in France – yep, there is popcorn in there.

Also, unlike the U.S., a lot of the candy here was unwrapped.  The kids had a scoop of popcorn dumped into their bags at a bar and the yogurt shop used tongs to get a few pieces of candy from the toppings station.  Normally I would never allow my kids to eat unwrapped candy on Halloween, but when in France….

We saw a wide variety of costumes during our trick or treat adventure.  There were a lot of witches and several bedsheet ghosts.  It was also common for the adults to dress up.  And if they dressed up, they went all out!  Some of the  face makeup was the most elaborate I have ever seen.  I wish I had asked a few people if I could take their picture.  One girl had a gash painted on her forehead that I would have sworn was real.

I should have taken my camera out instead of just using my phone, but you get the idea of what it’s like to trick or treat in Old Town Nice. This bar even had a “bloody” plastic sheet at it’s entrance! In the yogurt shop, the kids were given a scoop of candy, dumped straight into their bags. Thumbs up for bonbons

Celebrating Halloween in France was a unique experience. They kids may not have came home with bags overflowing with candy, but they didn’t care. Neither K nor Lucy would stop talking about how much fun they had and how neat it was to trick or treat in the stores. It goes to show, it doesn’t matter where you go, it’s always cool to be a ghoul!!!

Where have you celebrated Halloween?