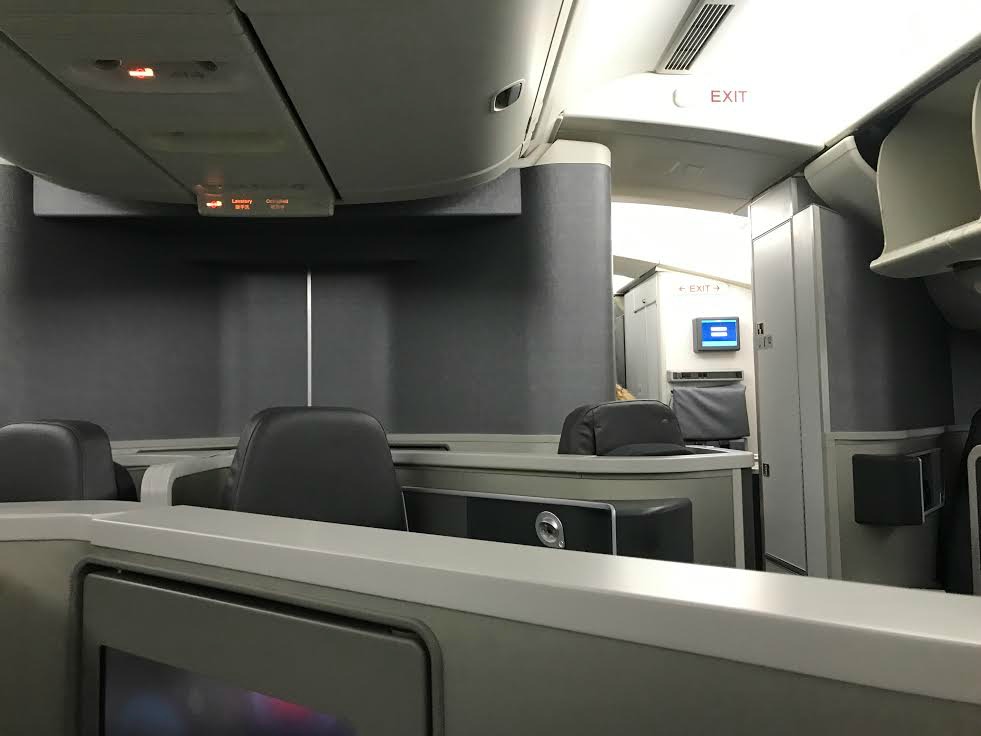 Flying back to Nice from the USA, we were again ensconced in luxury. We settled into our roomy, comfortable seats and prepared ourselves for the 7 hour flight. The business class seats lay flat, come with a ton of storage and a nice media center.  I’m not sure I’ll ever get my kids back in economy for a long-haul flight again! We allowed plenty of time for the heavy New York traffic and the check-in process at the airport. After researching several options, we decided a taxi was the best transportation method for my family of four to get to JFK from the Warwick Hotel in Midtown.  There is a flat fare to the airport, so there were no surprises when it came time to pay.

As business class passengers, we took advantage of priority check-in. This was great, as the standard check-in line and kiosks were jam packed. Even in the priority line, we still waited approximately 20 minutes.  Another great feature of flying business with American, is the extra luggage allowance. We were each allowed 2 checked bags, up to 70lbs each! When packing for a year, we really needed all the extra space and weight we could get!

Our understanding was that there was supposed to be separate priority line through security. That turned out to be pretty much just filtering us into the line with everyone else. Before entering the lounge, I had inquired about the distance to our gate. I was informed that it was conveniently located just a short distance away. This meant we could relax and enjoy the lounge for even longer. We packed up and headed to the gate only a few minutes before boarding time and, as we had priority boarding, we only waited a couple of minutes for our turn to head to our seats. The Boeing 777-200 has a larger business class area than the Airbus A330-200 we flew over on. I preferred the intimacy of the Airbus, even though the premium cabins were split into two separate cabins, allowing for less seats in each section.  There are currently three seat layouts on American’s Boeing 777-200.  We flew on a plane with seats in a 1-2-1 configuration by Zodiac Aerospace.  This layout includes alternating rows of forward facing and rear facing seats.  I’m not a fan of the rear facing seats.  Even though I read that people didn’t feel motion sickness flying backwards, I wasn’t about to try it out.

However, people in the rear facing seats did seem to have a bit more privacy when sleeping. So there’s a plus!

Before our flight, I read reports of people feeling a vibration when the person in an attached seat moves. This is only supposed to be with the seats from Zodiac Aerospace.  I didn’t notice this in row 9, but take a peak at seat guru before booking, if you’re at all concerned.

And of course, leaving from JFK, there was a flight delay. This resulted in us taking off 35 minutes late, which in turn caused our next connection window to be too tight, resulting in our connecting flight automatically being rebooked. However, if you’re going to be delayed on the tarmac, it’s great to relax in business class! Everything at the push of a button As per our norm, the kids had window seats and Derrick and I were in the middle.  To avoid anyone sitting backwards, Derrick and I were in row 9 and the kids were in row 8 at each of the windows. The seats had plenty of room for me to relax and lay fully flat at the push of a button. There was an extra storage space under the foot rest to store items. Just be warned, you could lose something small once moving to lay-flat mode.  I had to retrieve one of Lucy’s sandals that ended up getting “swept” under the seat when she moved it back to the sitting position.

Due to the layout with rear facing seats, we had one child on each side of the plane. It would have been better to have both kids on my side.  That way I could more easily check on them and tell them when it’s time turn off the movie and to go to sleep!

The seats are roomy and comfortable and the best part is they lay flat at the push of a button! The seat is wide enough that I was able to lay on my side with my knees slightly up without a problem. Lucy was curled up in a nice little ball in her seat, so she definitely had plenty of room!

There was a large popup tray and plenty of storage space on the center unit for my phone, headphones, drink and iPad. A large entertainment screen was in the front and folds flat when not in use. To my left were controls for the seat and entertainment center.

There was a problem with both my and Lucy’s headphone ports.  We had to get an adapter to plug in our headphones so they would work.  It took longer that I thought necessary for the adaptors to be brought to us, as they insisted on helping other passengers settle first. Since there was a defect in our seat, I would have thought the adaptor would be a priority over giving people a newspaper.

It was also strange to have a shoulder belt to fasten as well as a lap belt.  The shoulder strap had to be worn during taxi, takeoff and landing.  Not an issue, but strange.

Available at our seat when we boarded was a blanket, pillow, Bose headphones and a bottle of water. The amenity kit provided was, again, pretty standard.  We now have four more Cole Haan bags but this time in black instead of navy blue. The kit included a toothbrush, toothpaste, mouthwash, C.O. Bigelow lip balm and lotion, socks, eye mask, ear plugs, headphone covers (for the Bose headphones provided) and a pen.

I’m sure all the people we sat next to after our five hour delay in London appreciated the fact that we all were able to brush our teeth!

The entertainment didn’t vary much from the flight over.  But, there were still several recently released movies available that I didn’t watch on our first flight.  The Bose headphones are a nice touch. After we were settled in our seats, a flight attendant came around with a tray of water, orange juice and champagne for our pre departure beverage.  Of course, I had to start the flight off right with a glass of champagne.  The kids picked orange juice and Derrick also had champagne.

Warm mixed nuts and beverages (champagne for me, red wine for Derrick and sodas for the kids) were served around the time we reached cruising altitude.

As we were on a red eye, dinner was served early on in the flight. I chose Norwegian salmon while Derrick and the kids chose the beef tenderloin moussaka.  Derrick and the kids gobbled up their tenderloin and surprisingly, Lucy ate some of her eggplant as well.  My salmon was very good and the artichokes were cooked well, but the fries were a little soggy. I wasn’t a fan of the potato blinis appetizer but the shaved brussels sprout salad was pretty good.  I love that a bread basket was brought around for passengers to choose their preferred bread. I picked a pretzel roll. My dessert was a cappuccino mousse cake that I didn’t really like, and the kids both chose the mint chocolate chip ice-cream.  I’m pretty sure the kids were given seconds, because it look Lucy a long time to eat that ice cream.

I had chosen to be woken up for breakfast but it was rather disappointing. I ordered the omelette but only got through a couple of bites. I must have still been half asleep because I forgot to take a photo.

There was also a nice selection of snacks in the galley during the flight. These are serve yourself, which my kids were more than happy to do.  I kept seeing K come back with snacks, but again, I forgot a photo.

The service was good, but not exceptional.  The flight attendants were courteous and great with the kids. It is always huge bonus to have kid friendly crew! During a service, the attendants were pretty much on top of it. But at other times, they were just chatting in the galley. On our previous flight, the crew passed by several times to check on passengers. This flight, you were pretty much on your own even though many people didn’t get to sleep until late.

Overall, it was a great flight into London. The seats were comfortable and I found a wide selection of movies to watch.  The food and service was good, and we all arrived fairly well rested. We would definitely consider American Airline Business Class again, if the price was right…

Have you flown business class on an American  Boeing 777-200?  Let us know your experience.

See the current deals on expedia