I think The Old Storehouse had the best seafood chowder.  Lucy agreed but Derrick and K are still on the fence.  What else did we eat?  Derrick had a huge plate of fish and chips on one occasion and the Shepard’s Pie, on another. The kids ate off the kids menu and had either Irish Stew or burgers.  The burgers were plenty for the kids, but K was still a bit hungry after the kids portion of Irish Stew.  Or maybe he just wanted more of Moms chowder…. I needed a pick-me-up after lunch and wine 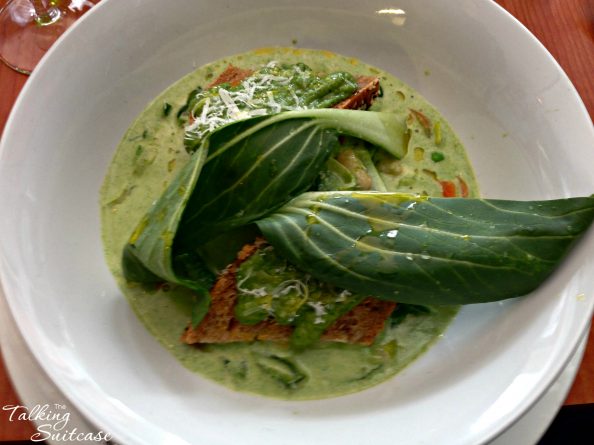 The best lunch in Dublin was at The Vintage Kitchen.  We had fantastic food and you can bring your own wine and beer!  The menu is fairly small and changes frequently since they use fresh ingredients from the local area.

I enjoyed White onion & rosemary soup with fennel butter & bread (even though I was a bit worried about eating green soup),  Lucy had gorgonzola and panchett risotto, K devoured the cajun seafood chowder and Derrick went with the salmon.   We all practically licked our plates clean.  Everyone left full even though the portions were smaller than at the pubs. Yeah, brother helped with 1/2 of this

We went here intending to have an Irish breakfast, but it took us a bit longer to get moving this particular morning.  Breakfast is served all day, but by the time we arrived to eat,  only Lucy was in the mood for breakfast.  Derrick had a HUGE plate of fish and chips.  It was cooked perfectly and not greasy. He also tried a Galway Hooker (beer) and it’s now one of his favorites.

K decided to go Italian and ordered carbonara off the kids menu. Lucy went with a monstrous bacon sandwich and I, surprisingly, had the soup of the day and a wrap.

This is a cool, bright bar with good service.

Kids menu – both kids chose the kids burger and it was pretty much the size of an adult meal. Derrick and K preferred the seafood chowder here (that I ordered). Have you noticed a pattern?  Derrick thought the steak was good, not the greatest ever, but still, quite good.

If you want to get away from the Irish cuisine, head to Banyi for sushi.  Derrick ordered the Bento Box and the kids and I enjoyed sushi rolls. We tried the California Roll, Dragon Roll & Ebi Tempura Roll. They were different from the ones we order in the States, but still delicious. Great taste and lovely presentation.

There isn’t a kids menu and it’s pretty expensive. However, the food was delicious and the service was excellent. They also offer take out and delivery.  Had I known this in advance I would have ordered in.  I was exhausted after our day trip from Dublin to Blarney Castle and Cork.

We’re not a fan, but everyone says you must drink Guinness & Irish Whiskey.  If you’re not into either of those, there are a ton of microbrews you can try.  In addition to the Galway Hooker, Derrick also liked the Hophouse 13 Lager.

We did find alcohol to be particularly expensive. Maybe I’m too used to all that inexpensive French wine that paying 6€ per glass made my heart ache and my wallet throb. We solved that problem by shopping at the grocery store the first day.  Buying wine by the bottle was still more money than I’m used to spending, but it’s still much cheaper than drinking out!

A major plus for many of the restaurants was the availability of a children’s menu. Even though the kids seem to eat more than I do, I hate spending 15€ on a their burgers.

What have you found to be the best places to eat in Dublin?  Or share with us the best pub food in Dublin that you found.